Brussels – Speaking at the first day of the Somalia Partnership Forum in Brussels today, two senior United Nations officials commended the country’s government for its efforts in various areas – such as political reform, security, economic development, and recovery and humanitarian assistance – while flagging the need for further progress and international support for these efforts.

Addressing the Forum’s first session, one of the world body’s officials – the UN Under-Secretary-General for Political Affairs, Rosemary DiCarlo – praised Somalia’s leadership for its steps forward in developing a political roadmap for inclusive politics, especially with regard to preparations leading to the ‘one person, one vote’ elections in 2020-2021, and advances in its constitutional review process.

“The Federal Government of Somalia would need to continue its efforts in building constructive relations with all those who would benefit from its leadership: the federal Parliament, Federal Member States, political groups and civil society,” said Ms. DiCarlo.

“This will ultimately help to stabilize the political environment, achieve further progress and strengthen Somalia’s resilience against pressures that risk undermining its unity,” she added.

In his remarks, the UN Secretary-General’s Special Representative for Somalia, Michael Keating, encouraged the international community to “keep Somalia on the agenda,” and noted that the inclusive approach in Somali politics needs to be extended to building national security in an effort to build trust.

“I cannot commend the Government enough for its commitment to a genuinely holistic approach, to recognizing that it is not only about military and operations, it’s also about building institutions, rule of law, accountable local governance, reconciliation and countering violent extremism,” he said.

Taking place in the Belgian capital today and Tuesday, and organized by the Federal Government of Somalia, the European Union and Sweden, the Forum is a recurring international gathering to promote peace and development processes in the Horn of Africa country, which is facing a range of political, developmental, security and humanitarian challenges as it rebuilds after decades of armed conflict and climate-related shocks.

Attracting senior government officials and other representatives of the international community, the event provides an opportunity to highlight the advances Somalia has made to date and set objectives in the areas of policy, security, economic recovery and humanitarian issues for the coming six months. 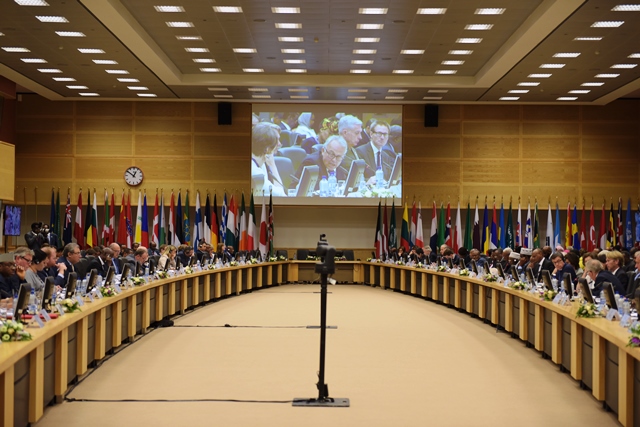 One of the key topics under discussion at this year’s gathering, and discussed today, was meaningful participation in Somali society and politics.

In her remarks, Ms. DiCarlo noted that further progress is needed to strengthen the constitutional, legal and institutional foundations of the Somali Federal State, including allocation of powers and resource sharing.

“Despite the challenges that may arise, it is critical that these processes are conducted in an inclusive, consensual manner to ensure ownership by the Somali people,” she said, adding that the UN is committed to advancing inclusive politics in Somalia.

“We are providing technical, financial and logistical support, and we strongly support nationally-owned and -led reconciliation processes, including the national reconciliation framework,” Ms. DiCarlo concluded.

The UN envoy to Somalia expressed the United Nations’ continued support for the country’s momentum, by strengthening the technical capacity of the federal and regional actors, and encouraging a coherent approach by the international community.

“The UN remains deeply committed, through its offices all around the country, and can provide a platform for engagement with federal members states and civil society organizations, especially women and youth groups,” Mr. Keating said.

The Somalia Partnership Forum will continue tomorrow with discussions, including at the ministerial level, on various topics, such as the role of women in peace and security and public-private partnerships.

Oil and Gas opportunities in Somalia

UN calls for action as Somalia on the brink of famine