Tens of thousands of Nepalese who spent the night under a chilly sky were jolted awake by strong aftershocks Sunday, and rescuers aided by international teams cleared rubble in search of survivors after a powerful earthquake killed more than 1,900 people across the Himalayan region.

A Nepal police official says at least 1,910 people have been killed, including at least 721 in Kathmandu. Deputy Inspector General of Police Komal Singh Bam says the death toll is expected to climb. Among the dead are 17 who were struck by a quake-triggered avalanche on Mount Everest that buried part of the base camp packed with foreign climbers at the end of the climbing season.

More than 5,000 in Nepal have been injured as a result of the earthquake, said Home Ministry official Laxmi Dhakal.

Saturday’s magnitude 7.8 earthquake, which originated outside the capital Kathmandu, was the worst to hit the poor South Asian nation in over 80 years. It destroyed the old, historic part of Kathmandu, and was strong enough to be felt all across the northern part of neighbouring India, Bangladesh, China’s region of Tibet and Pakistan, where a total of 60 people died.

“There were at least three big quakes at night and early morning. How can we feel safe? This is never-ending and everyone is scared and worried,” said Sundar Sah. “I hardly got much sleep. I was waking up every few hours and glad that I was alive.”

Billion Dollar Thief at the W.H.O.

A A warsame 3 weeks ago
Business

Lessons to be Learnt from 13 of Africa’s Top Emerging…

A A warsame 3 weeks ago

When the earth first shook, residents fled homes and buildings in panic. Walls tumbled, trees swayed, power lines came crashing down and large cracks opened up on streets and walls. 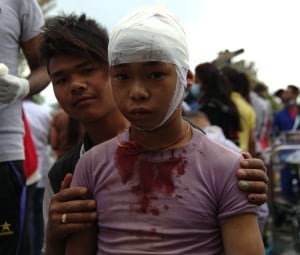 A quake with a preliminary magnitude of 7.8 struck Nepal before noon on Saturday. A magnitude-6.6 aftershock hit about an hour later. (Submitted by Patrick Adams)

After the chaos of Saturday — when little organized rescue and relief was seen — there was relatively more order on Sunday as rescue teams fanned out across the city. At one place, police rescuers were trying to extricate a man lying under a dead person, crushed by a pile of concrete slabs and iron beams. His family members stood nearby, crying and praying. Police said the man’s legs and hips were totally crushed.

“We are digging the debris around him, cutting through concrete and iron beams. We will be able to pull him out but his body under his waist is totally crushed. He is still alive and crying for help. We are going to save him,” said police officer Suresh Rai.

He said that government and private schools have been turned into shelters.

More than two dozen aftershocks jolted the area after the first quake and continued into Sunday. Forecasts called for rain and thunder showers Sunday and the temperatures were about 14 C.

The quake will likely put a huge strain on the resources of this poor country best known for Everest, the highest mountain in the world. The economy of Nepal, a nation of 27.8 million people, relies heavily on tourism, principally trekking and Himalayan mountain climbing.

The world reacted with alacrity to the disaster, offering aid in the form of money, relief material, equipment, expertise and rescue teams.

Foreign Affairs Minister Rob Nicholson said Canada is reaching out to provide help to the nation and the 388 Canadians known to be there.

“Canada will do everything it can to assist,” Nicholson told CBC News on Saturday from Iqaluit. 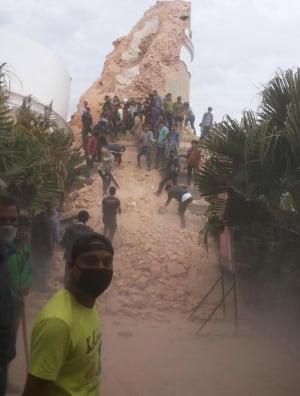 The quake toppled Dharahara, also known as Bhimsen Tower. The nine-storey-tall landmark was built in Kathmandu around the year 1832 as a military watch tower. (Twitter/@StefSimanowitz)

Canada is contributing $5 million to the relief efforts, a spokeswoman for the minister told the Canadian Press. International Trade Minister ChristianParadis said in a statement that the money would help to provide people with access to food, drinking water, shelter and health, hygiene and protection services.

Canada is also deploying a DART assessment team to Nepal. The military experts will determine whether the full disaster-response team should be sent to help Nepal recover.

CBC News has learned Ottawa is working to deploy the lead elements of the full team closer to Nepal. If the assessment team decides the response team could be useful, it could arrive in Nepal faster.

Nicholson said it is not known if any Canadians have been killed or injured, noting that communication with the area is still difficult.

Canada is co-ordinating its efforts with the UN, the Red Cross and diplomats in the area, he said.

“We mourn with the people of Nepal and India in the aftermath of this terrible natural disaster and offer our help and our prayers,” Harper said in a statement.

Canadians checking on their relatives and friends in Nepal and the surrounding affected areas should contact the department’s 24-hour Emergency Watch and Response Centre at 613-996-8885 or 1-800-387-3124, or by sending an email to sos@international.gc.ca.

The Registration of Canadians Abroad Service has 388 Canadians listed as being in Nepal. However, this number provides only an estimate as registration is voluntary.

Among the first nations to move to help was Nepal’s giant neighbour India, with which it has close political, cultural and religious ties. Nepal is the world’s only Hindu nation, and majority of Indians are Hindus although it does not have an official religion.

“The house was shaking like crazy. We ran out and it seemed like the road was heaving up and down.”– Shrish Vaidya, lives outside Kathmandu

Hospitals in the Kathmandu Valley were overcrowded, running out of room for storing dead bodies and running out of emergency supplies, the United Nations said in a statement.

A mountaineering guide, Ang Tshering, said an avalanche after the quake swept base camp where expeditions were preparing to scale Everest, flattening tents and killing at least 17 climbers and guides, and leaving an unknown number injured and missing and others cut off. Their nationalities were not immediately known.

Quake ‘definitely not a surprise’

The U.S. Geological Survey put the magnitude of the quake at 7.8. It said the quake hit at 11:56 a.m. local time at Lamjung, about 80 kilometres northwest of Kathmandu. Its depth was only 15 kilometres. The shallower the quake the more destructive power it carries.

Saturday’s quake — with the same magnitude as the one that hit San Francisco in 1906 — was about 16 times more powerful than the 7.0 quake that devastated Haiti in 2010. 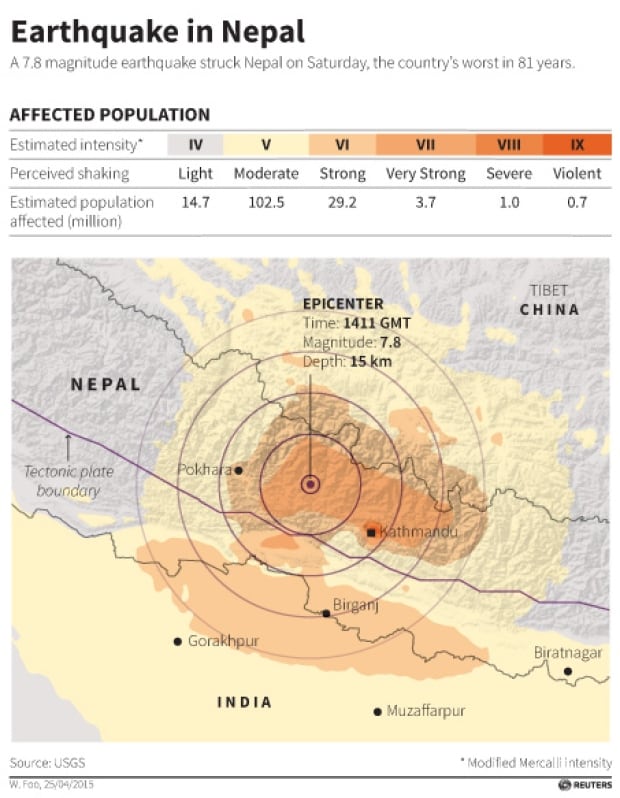 The quake occurred at the boundary between the two pieces, or plates, of Earth’s crust, one of which supports India to the south and the other Eurasia to the north. The Indian plate is moving at 45 millimetres a year under the Eurasian plate, and this results in earthquakes once every 500 years on an average, said Marin Clark, a geophysicist at University of Michigan, Ann Arbor.

So the quake was “definitely not a surprise,” she said. Over millions of years, such quakes have led to the uplift of the Himalayas. Nepal suffered its worst recorded earthquake in 1934, which measured 8.0 and all but destroyed the cities of Kathmandu, Bhaktapur and Patan.

The power of Saturday’s tremors brought down several buildings in the center of the capital, the ancient Old Kathmandu, including centuries-old temples and towers.

Among them was the nine-story Dharahara Tower, one of Kathmandu’s landmarks built by Nepal’s royal rulers as a watchtower in the 1800s and a UNESCO-recognized historical monument. It was reduced to rubble and there were reports of people trapped underneath.

The head of the UN cultural agency, Irina Bokova, said in a statement that UNESCO was ready to help Nepal rebuild from “extensive damage, including to historic monuments and buildings of the Kathmandu Valley.”

posted by Abdullahi ali warsame who is Mareeg.com Managing director . He can be reached by Email news@mareeg.com
Phoneline :+447737886245

It’s legitimate for China to order closure of US Consulate…

Safety and Immunogenicity of a China-developed COVID-19…

US continues to play Xinjiang card with Uygur bill despite…